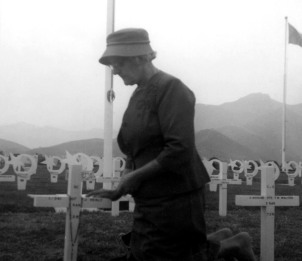 From book to exhibition and documentary.

What began as a non-fiction book about the impact of war on an Australian family has evolved into a multi-media project including a documentary and exhibition.

The book Passage to Pusan tells the true story of Australian matriarch Thelma Healy and her brave 15,000km solo journey to war-torn South Korea in 1961 to find the grave of her solider son Vince, who died fighting in the Korean War a decade earlier.

The Passage to Pusan documentary is based on the book of the same name by Australian journalist Louise Evans, OAM. It follows Louise as she retraces her grandmother’s pilgrimage to Pusan in South Korea to find her lost son’s grave and find some peace. The documentary was proudly produced by the Korean Cultural Centre Australia with assistance form the Australia-Korea Foundation and was filmed by Arirang TV, South Korea’s English-language broadcaster. The documentary was the highlight of the annual Korean Film Festival in Australia in August-September, 2017. It will also be screened in 190 countries via Arirang’s global network partners.